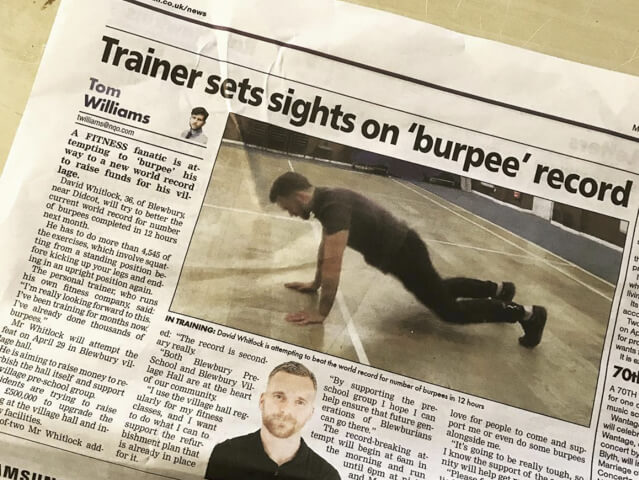 After seven hours of burpees (yes, seven hours!), 36-year-old personal trainer Dave Whitlock started to get emotional. His four-minute break every half an hour had started to creep into five, his tendons and joints ached. “When I knelt down to catch my breath, I almost started welling up. I’m not sure if it was exhaustion or happiness at having got that far. That happened another two or three times.” If that experience sounds grueling, consider that Dave had a whole five hours of burpees to go in a 12-hour Guinness world record attempt.

At 6pm, Dave collapsed having completed the challenge he set himself, completing 4696 burpees in 12 hours – a new world record. WhereScape is proud to have been Dave’s primary sponsor, contributing to the £3,500 raised so far for the preschool and refurbishment of the village hall in his hometown of Blewbury in Oxfordshire, UK.

If you didn’t know, a burpee is going from a standing position, bending down into a press-up position, bringing the legs back in, getting back up onto your feet, and jumping into the air. The version Dave did included going flat on his stomach and putting his arms out to the sides.

There was no substitute for physical sweat and toil as Dave trained to be in the condition he needed for the challenge. It just had to be done or he would have failed his challenge. Neither was there any way to get the results he wanted but to work hard for 12 hours solid, burning almost 9,000 calories in the process.

With physical fitness, it has been exhaustively proven that there is no shortcut or miracle cure. Articles online that promise instant results with drugs and new exercise machinery that cheat convention are usually designed to get clicks or even money from those looking for an easy way out.

In IT, the reality could not be more different. We are constantly finding new ways to do more with less. Lean IT teams are transforming their businesses’ analytical abilities by using automation to change the way they work. The kind of repetitive manual labor that Dave had to do is no longer necessary in most fields of IT. This means some companies offering miracle cures as a substitute for hard work are actually telling the truth, and have customers who can attest to the real results they’ve achieved.

Just as physical human feats, such as Dave’s, entertain and raise money for good causes, in business, the fastest route to the desired result will always create the most profit. There is no place for unnecessary manual labor in IT now, and the companies that realize this – Uber, Amazon, Airbnb et al, got well ahead of the pack by digitizing traditional services. While Dave had no choice but to toil away, almost reduced to tears, in IT there is now a better way.

Today’s market leaders use data to differentiate themselves. Today, centralizing data into a single, accurate and up-to-date version of the truth is becoming harder with every new technology that adds to this complexity. This is either beyond data teams who are yet to adopt automation, or they spend all their time and money trying to achieve it using methods that are prone to human error. 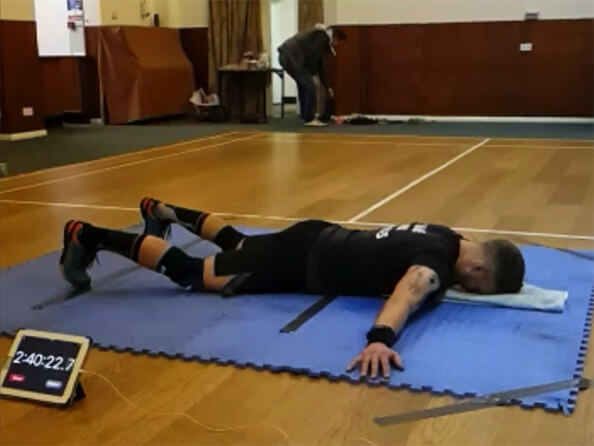 How to best use human potential

Most people struggle to do five minutes of burpees, but as the rest of the world went about their Sunday, Dave pushed himself to the edge of his physical and emotional limits from 6am to 6pm. However, it wasn’t just strength and endurance that got him over the finishing line, but the emotional support of friends and family that gathered for hours 11 and 12. “There were about 100 people watching me towards the end, keeping me talking and cheering me on. That really kept me focused and in the moment through the last bit.”

Dave’s challenge highlights what people are good for: acts of compassion, emotional support and creativity. Automation software seeks to leverage these attributes by removing repetitive manual labor from working lives, often redundant tasks in which human error is more likely. Dave used a digital clock to count time, but people to spur him on emotionally. With less menial work to do, IT workers can focus on being creative, using the accurate data automation gives them in innovative new ways to make their company more proactive, responsive and profitable.

WhereScape customers routinely achieve results such as “A year’s worth of data integration in one week”. Automation now does the design, development and operational legwork of many people in a fraction of the time. This leaves IT teams free to drive and act on business insight, rather than sweating away in often fruitless attempts to produce it. With an ever-evolving list of data sources and a greater volume of data being created, often streaming in real-time from thousands of IoT sensors, manual BI methodologies simply can’t keep up today.

Visit Dave’s Justgiving page for information or to donate.