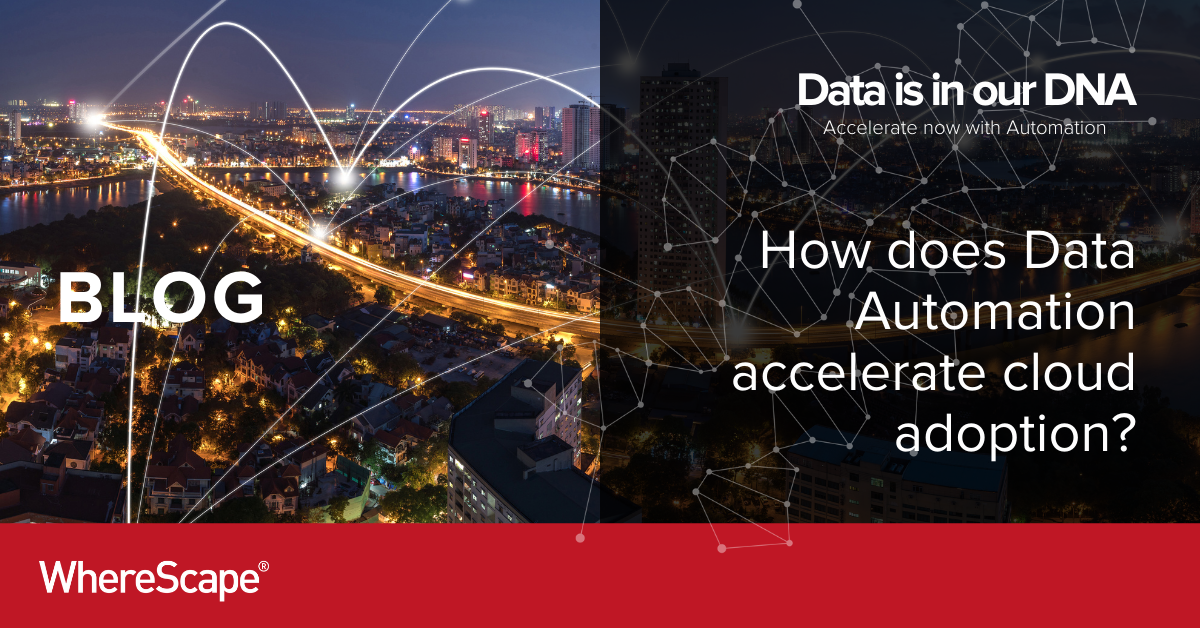 Companies aiming to modernize their data infrastructure often pair Data Automation with Cloud computing to achieve common goals: saving money and increasing agility. While the Cloud allows companies not to pay for storage and compute capabilities they do not use, Data Automation enables teams not to waste time on repetitive hand coding tasks that are no longer necessary.

In addition to these complementary qualities, Data Automation is essential for reducing the time to value for Cloud migration projects. For many companies, the hurdle between their legacy infrastructure and a move to the Cloud is the time and cost of migration. Teams are put off by the prospect of a lengthy, complex project needing months or potentially years of work by developers working by hand. This is a Catch 22 scenario: the prospect of downtime to complete the migration is so daunting because they are constantly behind on projects and fighting fires caused by that infrastructure in the first place.

In reality, it doesn’t have to be that way. That hurdle can be significantly lowered by a Data Automation tool to generate the majority of the code needed for the migration, reduce the technical complexities of the project, and ensure the infrastructure does what is expected first time.

It is possible to migrate to the Cloud without an automation tool, but hand coding increases project length and stress levels while decreasing the number of new features a data team can deliver. Then there is the danger of human errors being revealed further down the line, and the risk that the whole process is not documented properly. It is always a surprise to see many companies still relying on 1990s infrastructure, when technology has been available to work faster and more reliably for some time.

How does Data Automation help with Cloud migration?

WhereScape RED is an Integrated Development Environment and automated code generator that enables developers to spend less time writing code for repeatable processes. Without spending most of their time doing this lengthy and now unnecessary work, they can focus on producing business logic that’s unique to the demands of their company. The migration project can be completed according to best-practice templates that have been tweaked in accordance with the experience of hundreds of successful migrations.

An automated data warehouse is fully documented and continues to be maintained and changed rapidly by the automation tool. This means that last-minute business requests that were not on the original plan can be incorporated with minimal impact, including their up- and down-stream implications. Customers end up with a better data warehouse than they would have got with hand coding, in a fraction of the time, and this is possible with leaner, smarter teams. This means more collaboration with the business to ensure the architecture is capable of fulfilling its needs and fewer errors to slow the delivery down.

Advantages of an automated Cloud infrastructure

Pairing an automation tool with the scalability and lower costs of the Cloud means that data warehouses and data warehouse teams can be agile and run more efficiently. They can do more with less and represent better value to the business. However, a change of hardware from on-premises to public Cloud is just the start. There are many other advantages to an “automation first” mindset. As developers get used to letting the Data Automation tool take the grunt work, and see that it is done quickly and to a high standard. they typically start to realize that more tasks can be automated. Processes begin to get gradually tighter, with less time wasted. They start to trust automation once they see the results, and this often has dramatic implications for work/life balance.

“Now I can actually go on vacation and I don’t have to read my emails. I don’t have to get up at six in the morning, because WhereScape does it for me.” – Torgil Hellman, Chief Architect, Atea.

Cloud infrastructure built with Data Automation tools like WhereScape is future-proofed in a number of ways. Firstly, it is built with industry best practice lineage and documentation, with no shortcuts taken. This means that two or three years down the line, it will not suffer the same problems as hand-built architectures often do. This is especially true with Data Vaults. Often, we speak to companies and tell them about our software, and they choose to build by hand. Then a couple of years later, they come back and say the project has got out of control, and they need the structure that only automation can provide.

Also, WhereScape is metadata-driven. It writes the metadata that enables your existing architecture to work much more efficiently. Because of this it is database agnostic, so architecture that was built or migrated with WhereScape can be migrated to any other database, on-premises, Cloud or hybrid, even faster if you ever need or want to move again. With the speed database technology is moving at the moment, this is crucially important.

If you like what you’ve heard about WhereScape Data Automation software, register for a live 60-minute Virtual Tour to see WhereScape in action.